It’s another big win for the Nigerian music industry as two songs from the country make it onto EA Sports’ official FIFA 2023 video game soundtrack list.

According to reports, the football simulation video game published by Electronic Arts, FIFA 23, will be released on September 30, 2022 for PlayStation 5, Xbox Series X|S, PC, Stadia, PlayStation 4, and Xbox One.

“Very honored to have my track ‘SKELELE’ ft. @Olamide featured on The World’s Game #FIFA23 huge win for me, my team, my shockers and Afrobeats as a whole.”

Legit.ng captured some of the reactions, see them below:

“Congratulations, my brother! But you will still collect sha normally. »

“We definitely play once we bond pp! Congratulations bro.”

“Afrobeat is taking over the world, you can see the world’s top artists are vibrating and collaborating with our song, a big win for Africa and Nigeria as a whole.” 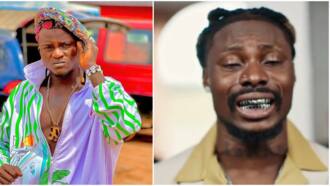 ‘I & Asake are the same set’: Portable Zazu warns those who compare Terminator singer to Wizkid, video trends

It comes as Wizkid becomes the first African artist to host Apple Music Livewhich is due to take place on September 27, 2022.

Breaking the good news to his fans, Wizkid revealed that he will also be showcasing his highly anticipated album, More Love, Less Ego (MLLE), at the event.